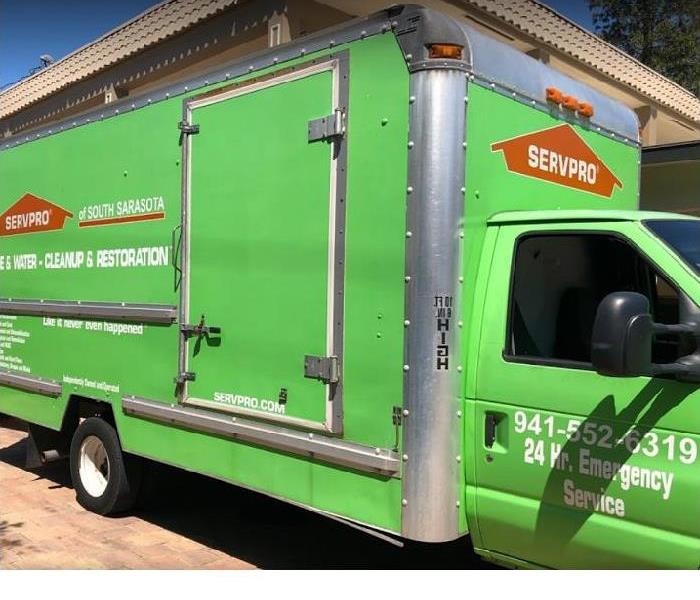 Our Green Fleet is loaded with restoration equipment so that we restore any flood damage you may have.

Sarasota is a Mecca for Music, Art, and Entertainment, a Coastal City with Immense Culture and Artistic Inspiration

Art is a defining component of our heritage in Sarasota, making it vital that we continue to take actions to protect some of our long-standing festivals and events that promote various media and live entertainment. Even during times of change such as we witnessed throughout the past year, the willingness to diversify and grow becomes a powerful tool for the Gulf coast residents and tourists. Whether the sun is shining, or the storm has left a mess, Sarasota is a community that bands together. Long-standing elements in the city like our SERVPRO team can help in these post-storm scenarios too.

Since 1973, this theatre has been as much of a symbol of the arts in the community. There are six main branches and programs that have a home in the Theatre, including:

In total, the many structures that make up the Florida Studio Theatre (FST) take up two blocks. This theatre has a total of five grand performing spaces, including Keating and Gompertz Theatres, the Goldstein and John C. Courts Cabarets, and the Bowne's Lab Theatre. With more than 220,000 attendees every year for its various performances and programs, and a high-level of subscribing patrons, this non-profit theatre is among the largest and most active in the country. Some of the most profitable and memorable performances of recent years include Unchained Melodies, 191 performances of Blue Suede Shoes, and more.

Music has always been a centerpiece of Florida's culture and the arts, especially in coastal communities like Sarasota. Our fixation on live entertainment has provided a welcoming location for music artists and independents and larger troupes like the Sarasota Orchestra that has been in operation since 1949. It would be this talented and nationally recognized chamber music group that developed an annual Sarasota Music Festival to welcome the most recognized educators and gifted pupils of the genre to Sarasota for the three-week event.

Beyond the noteworthy orchestra, the city has always attracted some of the most prominent names in music. While many of these just passed through with memorable performances at the Jazz Club of Sarasota, such as Gregg Allman, Tommy Dorsey, and even Elvis Presley, others have found Sarasota to be the place they want to settle down. Brian Johnson of AC/DC, Joe Perry of Aerosmith, and Dickey Betts – the guitarist and founding member of the Allman Brothers.

Cultural Festivals Happening in the City

Events can showcase many of the talents and ambitions of many of Sarasota's most promising and talented residents. Festivals range considerably in subject matter from street painting to other media. The common thread tying many of these annual occurrences is the various arts and cultures they all represent. In our growing coastal community, we have many festivals and exhibitions to await, and some of the most popular of these include:

Is Crawlspace Flooding Damaging to Your Sarasota Property?

Storms and damaging weather events are not uncommon to Sarasota and other coastal communities, so having a plan to clean up after these messes are vital. Understanding your limitations in this regard can ensure that the right steps occur to thoroughly remove water and moisture after flood events to thwart potential mold damage that could result. As a leading storm damage response team in Sarasota County, our SERVPRO team stays prepared for these emergencies with production vehicles stocked with our advanced water removal and drying tools.

The crawlspace of homes is the most likely place to become damaged by flooding situations initially, so we have numerous tools to address these situations. Pooling beneath your home can lead to widespread mold and microbial threats and a weakening and deterioration of your house's structural support. Removing water is the first step, and there are several methods for this. When debris is present, trash pumps are among the favored options, as these can pass solids when necessary through broader discharge and intake hoses.

As a general contracting firm licensed through the state of Florida (#CGC1504870), we have other permanent solutions that can keep damaging crawlspace flooding from becoming a recurring threat. Crawlspace encapsulation coats the surfaces with thick poly-sheeting to prevent moisture exposure. Installing drainage systems and sump pumps can keep the crawlspace dry and prevent any water from reaching the house's main floor.

Flood damage in Sarasota homes can be a threatening situation. Our SERVPRO of South Sarasota team can help with efficient extraction, cleaning, and repairs to make it "Like it never even happened." Give us a call today at (941) 552-6319.